ALL ALLEYS LEAD TO ART

Downtown Kokomo is home to great public art spaces thanks to the Greater Kokomo Downtown Association’s All Alleys Lead to Art initiative.

“The initiative’s mission is to not only create inviting public art spaces but to also create learning opportunities through the installation of the art accessories that allow for a variety of art forms to be enjoyed in alleyways around downtown,” said Susan Alexander, manager of downtown creative placemaking for the Greater Kokomo Economic Development Alliance.

The most recently transformed alley , named Courthouse Alley, opened to the public on Sept. 7, 2019, and is located on the south side of the Courthouse Square on Sycamore Street.

Downtown Kokomo is no stranger to alley transformations, or “activations” as they say in the industry.

In the late 1990s, the Kokomo Common Council began passing ordinances to close some downtown alleys to vehicular traffic as part of the early stages of downtown revitalization efforts.

“Now open only to pedestrians, the newly found public spaces made it possible for us to create inviting gathering areas in the heart of the city,” Alexander said. “While efforts were already underway, these new opportunities really set the stage for placemaking efforts to begin in earnest.”

The first project was Alleyscape, now called Garden Alley, located on the east side of the Courthouse Square on Main Street. The alley opened in September 2001 after community organizations came together to add green space, public art, lighting and benches. The alley includes raised bed seating and art screens designed by students at the Kokomo Area Career Center.

Garden Alley was followed in 2014 by Artist Alley, a 24/7 outdoor art gallery. Located next to Artworks Gallery at 210 N. Main St., the space opened with nine art mounts to accommodate an annually changing exhibit of large-scale artwork and sculptures, and has grown to exhibit 16 art pieces.

It’s the draw of those alleys to visitors and residents alike that created the spark for All Alleys Lead to Art, Alexander said.

Because of its financial support of Artist Alley, the downtown association approached the Community Foundation of Howard County with the project in 2017. The community foundation approved grant funding for the project, which allowed for the creation of three additional alley activations and upgrades to Artist Alley and Garden Alley.

Two new alleys include Geek Alley next to Kokomo Toys & Collectibles and Courthouse Alley on Sycamore Street. Each of these alleys has a unique atmosphere and highlights a different medium of art, including video, light, sound, and live performance.

“The beauty of this project is that it’s not buying art. Rather, it’s making art possible,” Alexander said. “This is creating momentum for the burgeoning art movement in Kokomo. Creating these art opportunities is not only encouraging current residents to get out and explore, but we have people moving to Kokomo because of our art scene.”

“The beauty of this project is that it’s not buying art. Rather, it’s making art possible. Our hope is that these alleys will help propel forward the work of professional and student artists, both locally, regionally and statewide.”
— Susan Alexander
Manager, Downtown Creative Placemaking, Greater Kokomo Economic Development Alliance 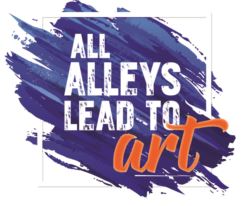 (2001) The first alley to be transformed in downtown Kokomo, first named Alleyscape. Located on the east side of the Courthouse Square on Main Street. Community organizations came together to add green space, public art, lighting and benches.
Artist Alley
(2014) A 24/7 outdoor art gallery located next to Artworks Gallery at 210 N. Main St. The space opened with nine art mounts to accommodate an annually changing exhibit of large-scale artwork and sculptures. Alley updated as part of All Alleys Lead to Art in 2018 and now features 15 art mounts.
Courthouse Alley

(2018) The frst full alley transformation project of All Alleys Lead to Art, it’s located on the southside of the Courthouse Square on Sycamore Street. The alley’s Pallets with Purpose exhibit was a collaboration between FCA US LLC, The Crossing School of Business & Entrepreneurship, SHAK Makerspace and the Greater Kokomo Downtown Association.
Geek Alley
Is located next to Wings Etc. on Sycamore Street. This alley features a permanent stage with electrical service, allowing for live and music performance art. 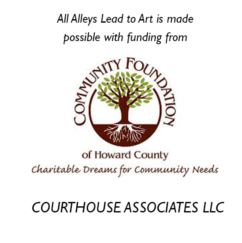